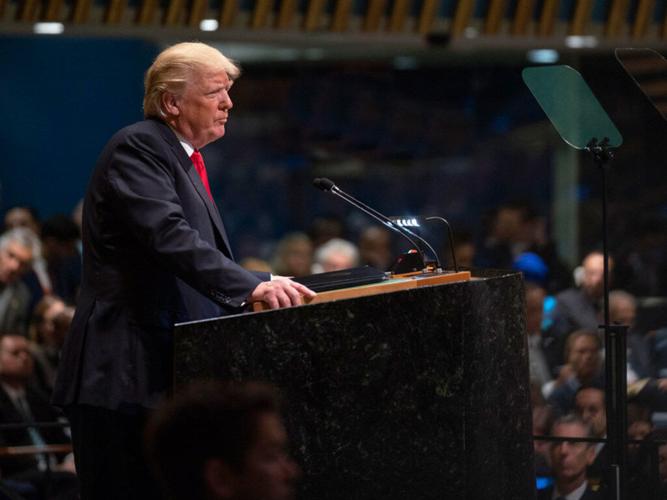 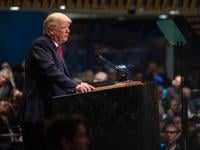 Donald Trump speaking to the United Nations late in his presidency. 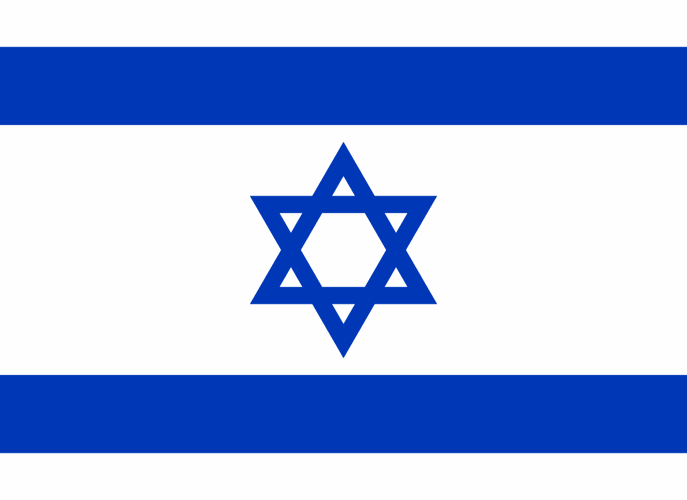 The Zionists Organization of America, established in 1897, has throughout its history supported Israeli nationhood. It "played a key role in the Jewish State’s re-establishment" on its ancient homelands in 1948.
1 of 2

Donald Trump speaking to the United Nations late in his presidency.

The Zionists Organization of America, established in 1897, has throughout its history supported Israeli nationhood. It "played a key role in the Jewish State’s re-establishment" on its ancient homelands in 1948.
At a gala held in New York City on Sunday night, November 13, the Zionist Organization of America (ZOA) awarded its highest honors to former President Donald Trump.
National President Morton A. Klein of ZOA said, in announcing the award, "ZOA rarely awards the Theodor Herzl Gold Medallion. It has been presented only to other renowned world leaders and dignitaries like Lord Balfour, Winston Churchill, Harry Truman, David Ben-Gurion, Golda Meir, Menachem Begin, and Sheldon G. Adelson.
(https://zoa.org/2022/11/10446526-leading-jewish-group-to-honor-trump-for-his-pro-israel-work-joins-ranks-of-meir-begin-ben-gurion-cnsnews/)
The mention of U.S. president Harry Truman is notable because the Missouri Democrat was the president when the modern nation of Israel was established. Truman defied the counsel of many American diplomats when he immediately recognized the reaffirmation of Israeli nationhood in 1948.
In a pre-event statement (on November 3), Klein reflected , “As a champion of Israel and the Jewish people, President Trump is certainly worthy of being in that company” of strong supporters of Israel.
The former president is credited with establishing, during his presidency, the framework for the Abraham Accords. As a result of the accords, peace agreements and diplomatic relations of varied substance have emerged between Israel and Bahrain, the United Arab Emirates, Morocco and Sudan
Momentum from the Trump-era accords has continued into the presidency of his successor.
(https://www.city-sentinel.com/news/arab-us-top-diplomats-in-israel-as-mideast-dynamic-hifts/article_77d08a04-aea0-11ec-8ace-1b0cde16eb64.htm
Klein asserted, concerning the 45th U.S. President: "President Trump is the best friend Israel ever had in the White House.”
David Schoen, chairman of the ZOA Board of Directors, said, "Forging the historic Abrahm Accords—which established peace between Israel and Bahrain, the United Arab Emirates, Morocco and Sudan—would, on its own, merit this honor. But President Trump has achieved so much more. Adhering to American law previously ignored by presidents of both political parties, he relocated the US Embassy to Israel’s eternal capital, Jerusalem."
U.S. Senator James Lankford, R-Oklahoma, has sometimes criticized the former president, although he often supported the Trump administration’s policies.
Senator Lankford aworked closely with Trump-era officials on international relations and other issues. Lankford applauded Trump's decision to relocate the American embassy to Jerusalem. Lankford has sustained strong support for the emerging detente of Israel with crucial neighbors.
(http://mccarvillereport.com/archives/54262?)
Schoen’s reflections on Trump continued:
"[Trump] strengthened legal protections for Jewish students on college campuses. He recognized Israel’s sovereignty over the Golan Heights and withdrew from the dangerous Iran deal. He acted on principle rather than politics by signing the Taylor Force Act and withdrawing from the UN’s so-called Human Rights Council, sending the message that Americans’ tax dollars will not go toward paying terrorists and anti-semites. The list goes on and on."
Klein said, in the November 3 organizational statement, “Given that ZOA is a bold, unapologetic voice fighting for the safety and security of Jews and Israel, combating anti-semitism, and embracing the truth, we are proud to be honoring and thanking the 45th President of the United States.”
Note: Pat McGuigan of The Oklahoma City Sentinel has written frequently about the Nation of Israel and Middle East countries since the 1970s, as both a reporter and a commentator. Pat has covered communities of faith, religious freedom and related issues frequently over the past decades.