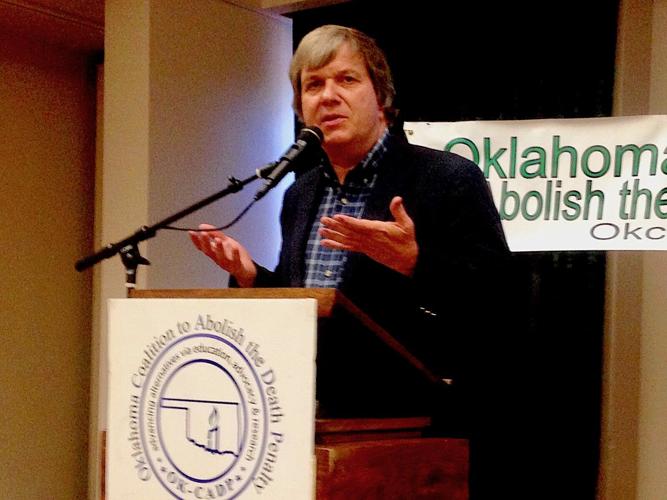 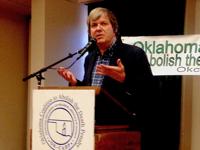 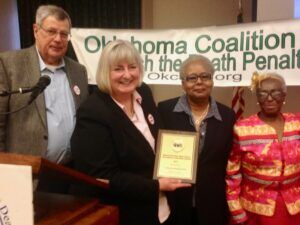 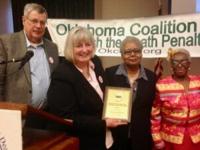 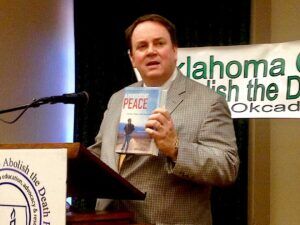 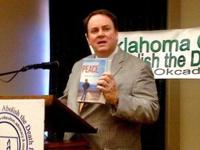 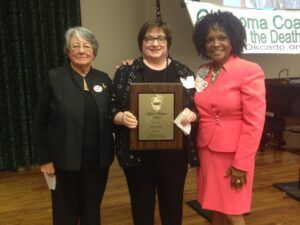 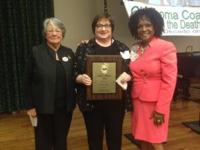 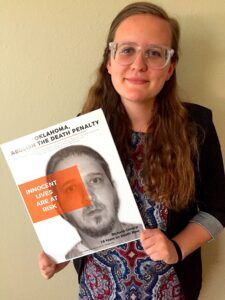 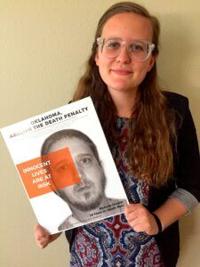 Over 150 people attended the event held at the Cathedral of Our Lady of Perpetual Help – Connor Center, in Oklahoma City.

“Fr. John Dear’s story of passionate activism both inspired and challenged us to remain vigilant in our mission to end the death penalty in Oklahoma,” said Connie Johnson, OK-CADP chair.

Internationally recognized as a voice for peace and nonviolence, Rev. Dear is a priest of the Diocese of Monterey, CA who has served for four years as the Executive Director of the Fellowship of Reconciliation, the largest interfaith peace organization in the nation.

Dear helped to bring about the abolition of the death penalty in New Mexico by the state legislature in 2009.

Arrested more than 80 times while pursuing his activities for peace. Dear spoke of his many activist experiences such as arranging for Mother Teresa to help in the appeal to numerous governors to stop executions.

The Outreach Coordinator for Pace e Bene, a non-profit group promoting a culture of peace and nonviolence, Dear has been nominated three times for the Nobel Peace Prize, including by Archbishop Desmond Tutu and U.S. Senator Barbara Mikulski

“The OK Death Penalty Review Commission Report just concluded that innocent people have been put to death on Oklahoma’s death row.” Dear said. “With that one statement, Oklahoma can never again execute anyone ever again. Of course, the death penalty is unfair, immoral, unjust, and racist. It’s way too expensive. It doesn’t bring closure or peace. But now we know it also kills people who have not hurt anyone. The time has come for Oklahoma to abolish the death penalty once and for all, as so many other states are doing.”

Don Heath, OK-CADP vice chair said, “John Dear inspired us to use our imagination, to envision what a nonviolent Oklahoma would look like, where all people are regarded as daughters and sons of a loving God, where there is no place for racism or inequality or retribution, where everyone gives and receives clemency.”

The program featured three Abolitionists Awards honoring individuals who have demonstrated “extraordinary effort to end the death penalty in Oklahoma.”

Presenting the Opio Toure Award, attorney and OK-CADP board member Jim Rowan said, “I nominated Cathy Hammarsten because she worked hard and achieved a life without parole verdict for Darrien Clark earlier this year. She has been a member of the Oklahoma County Public Defender’s office capital trial team for the last twenty years and has gotten consistently good results in numerous cases.”

According to Amnesty International, most often “those who end up on death row are not the worst offenders, but those who experienced the worst childhoods, had the worst (or non-existent) mental health care, or are saddled with the worst lawyers.”

Johnson presented the Abolitionist Award, calling Heath, co-pastor of Edmond Trinity Christian Church (Disciples of Christ), a “beacon of light and a calming spirit” who was ‘good with numbers.” She added that they had “bonded in the way chairs and vice-chairs should.”

The recipient of the Lifetime Abolitionist Award, Sine has been “active on the OK-CADP board” for “a great many years,” said presenter and executive board member Margaret Cox, stating that the award “goes a long way towards explaining her passion for justice and mercy, her dedication to a just cause, and her spirited defense of those who cannot defend themselves.”

“While this might be controversial, I believe in putting a face to an issue. I can argue the death penalty all day, but these are the people actually affected by it,” Martin said.

The names of 29 people executed since the 2016 OK-CADP Annual Meeting were read by Sadie and Moses Mast of the Oklahoma City Joy Mennonite Church.

In invocation was given by Rep. George Young, D-Oklahoma City and the benediction was performed by the Rev. John Metzinger, the Rector at Our Lady’s parish, host site for the event.

Following the program, Dear held a book signing, which included several of his titles, including The Beatitudes of Peace; The Nonviolent Life; Walking the Way; and Peace Behind Bars.