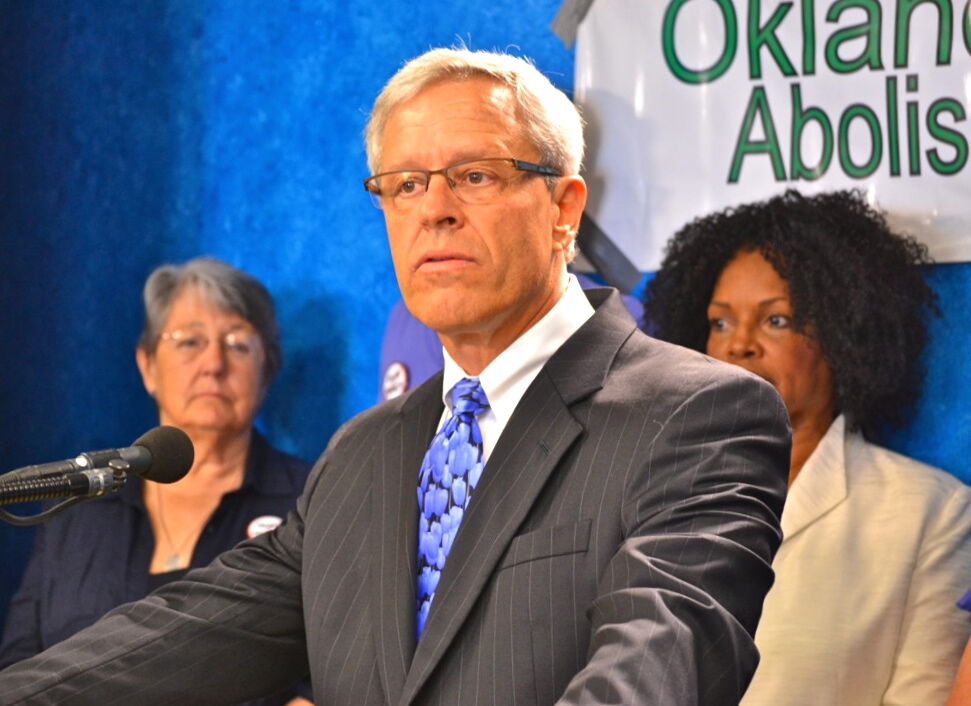 Don Knight, an attorney from Littleton, Colorado who specializes in death penalty litigation, spoke July 13 at an Oklahoma state Capitol press conference. He called on the public to come forth with details on the events of January 7, 1997 at the Best Budget Inn in Oklahoma City. Barry Van Treese, proprietor of the Inn, was murdered. Knight and his allies believe the man sentenced to die for Van Treese’s murder, Richard E. Glossip, is innocent. Left of Knight is Oklahoma Coalition to Abolish the Death Penalty (OK-CADP) board member Margaret Cox. To his right is former state Sen. Connie Johnson, D-Oklahoma City, presently serving as chair of the group. Photo by Mary E. Sine. 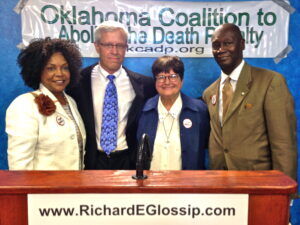 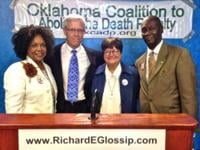 by Patrick B. McGuigan

OKLAHOMA CITY – Depending on their role in a given case, attorneys clashing over major crimes seek to convince judges or juries, or both, of absolute certainty of guilt, or that there is “reasonable doubt” about culpability.

At this point in what is presently his most important case, attorney Don Knight can explain, at some length, why he cannot settle for reasonable doubt.

Justin Sneed admits he killed Van Treese, beating him to death with a baseball bat. He says Glossip hired him to do it, and Glossip has twice been convicted of murder-for-hire.

Sneed told investigators Glossip paid him for the killing. In return for testimony against Glossip, prosecutors made a deal with Sneed, who is now serving a sentence of life without parole at a medium-security facility.

Knight — who lives in Littleton, Colorado — asserts, confidently, there is plenty of reasonable doubt about Glossip’s role, if any, in the killing. But he needs enough fresh evidence to exonerate Glossip, or convince a judge with jurisdiction to grant a long stay.

At a July 13 press conference in the Oklahoma State Capitol Building, Knight advanced many of the usual arguments against the legal sufficiency of Glossip’s conviction.

He believes Glossip had inadequate legal counsel at both of his trials for the January 7, 1997 killing. He compliments lawyers who sought reprieves or reversals for Glossip in the appellate courts, but said they were out-gunned by prosecutors and the resources of Oklahoma’s attorney general.

Knight goes further than making technical or process arguments. Sharing the podium with Sister Helen Prejean and other opponents of the ultimate sanction, he told reporters he believes Glossip “is an innocent man.”

Knight said, more than once, “Nothing I say is intended to diminish the suffering the family [of Barry Van Treese] has gone through.” While stressing he believes Glossip did not cause or sanction the murder, in any case, “This is a case that is not in the league to be a death penalty case.”

Knight asserts, “The trial came after a deeply flawed investigation. Other possible suspects were ignored or ruled out.”

The place where the killing happened, “had a lower class clientele, and many unsavory characters.”

He sketched comings and goings of people from the Best Budget Inn, some suspicious and never, he says, accounted for by investigators.

Knight and others point to an online investigative report, dated June 29, by Liliana Segura and Jordan Smith for The Intercept, that weaves together the web of doubt about the case.

In broad review, Sneed says he was paid $4,000 for the murder, but Knight recounts tales of $23,100 in the trunk of Van Treese’s car, some of it covered with blue dye and never properly accounted.

Knight readily agrees that Glossip was not completely forthcoming about some details during initial conversations with investigators, but concludes Glossip at the time had no reason to believe he was himself under suspicion. Glossip ultimately told investigators Sneed had admitted the crime.

Knight told reporters at the Capitol, “Over time, Justin Sneed has often not told the truth. … Justin was capable of lying. He was a 19-year-old at the time.” Saying Sneed came “from a pretty tough background,” Knight wants to interview Sneed. He observes, “Justin did what he must have felt he needed to do for himself.”

To Knight, what stands out is “how uncertain the evidence is.”

His bottom line: “We say – and you’d think it would be true — that the death penalty is reserved for the worst cases. But to kill someone else when the person who admitted he was the murderer is not facing execution. …?”

Knight knows, “The case hinges on Justin Sneed. There are alternative suspects. We are trying very hard to get a new crew of investigators out. We are asking the public to come forward. It’s been 17 years. It’s going to be hard.”

Knight’s comments at the state Capitol encounter with reporters can be viewed at the OK-CADP website.

Knight’s case for Glossip comes down to the interlocking elements: 1. A poor and speedy investigation after the crime; 2. False eye-witness testimony and “the use of a snitch,”; and 3. Poorly funded and inadequate legal counsel.

He posed a rhetorical question to Oklahomans: “Why listen to me? We know how you feel about the death penalty. I respect that. But there’s one thing: no one wants an innocent man to die at the hands of the state.”

Knight called for those at the Inn that long-ago weekend to come forth. He pointed to other possible suspects, including Richard Page (with a long criminal past and a murder conviction in Arkansas), Richard’s brother Bobby “who dealt drugs and had a violent past,” and another Richard – Barrett who, as reporter Tim Farley summarized “served prison time and showed a history of violence.”

As has been reported often before now, all three of those men were also at or around the Inn the weekend Van Treese was killed.

After the July 13 press event, Alana Mileto of Broken Arrow, Van Treese’s sister, told Barbara Hoberock of The Tulsa World, “The facts of this case have been proven. The state of Oklahoma has seen this case through the extensive criminal justice process to insure justice for all parties.

“We stand together as a family, forever changed by this heinous murder, but with strong faith and resolve that justice will be served.”

Like Sister Helen Prejean and the others who spoke at the Capitol last week – former state Sen. Connie Johnson and state Rep. George Young – Knight knows it won’t be easy to get a state of federal court with authority to do so to issue what’s called a “successor petition” before September 16. Prejean said Glossip’s defenders need “a miracle.” Knight calls it a long-shot.

Additional information can be obtained at  www.RichardEGlossip.com. If anyone who was at the Budget Inn that weekend has information about the case, the time to contact Knight is now.