Numerous organizations, schools and businesses are stepping up to aid employees and contract workers impacted by the recent federal government shutdown. Facebook photo 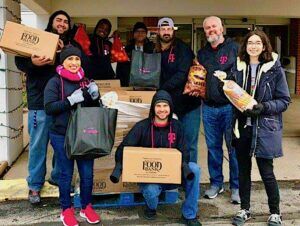 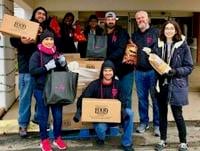 Friday, Jan. 25, 2019 UPDATE:  In light of today’s news, the Oklahoma City Zoo will still honor free general admission this weekend, January 26-27, 2019, to all federal employees (with valid federal ID) and up to four guests. The Zoo will begin charging for general admission starting Monday, January 28, 2019.

“Our hardworking neighbors in the federal government should not have to worry about providing food for their families,” said Katie Fitzgerald, chief executive officer of the Regional Food Bank. “We’re happy to have United Way, State Fair Park and the City of Oklahoma City partnering with us for this important distribution.”

In order to select from a variety of foods including pasta, cereal, peanut butter, canned vegetables and meat, fresh produce and bread offered by the Regional Food Bank, workers will need to present a valid federal ID or proof of federal employment/contractor status.

As result of the shutdown, the United States Department of Agriculture (USDA) ordered states to provide February benefits to Supplemental Nutrition Assistance Program (SNAP) recipients on Jan. 20. No funding is currently available for SNAP in March and it is widely expected that SNAP recipients will run short on benefits in February due to this early distribution.

“We know there are people out there who need help, and we want them to know we’re here to provide it,” said Debby Hampton, president and CEO of United Way of Central Oklahoma.  “Our partner agencies are ready and willing to help with any and all challenges stemming from the shutdown, including utility assistance or just someone to talk to about what they’re feeling.”

United Way agencies will be on site to discuss other free resources. State Fair Park is donating space for the event and the City of Oklahoma City is providing security for the event.

The Regional Food Bank has asked its 300 community-based partner agencies in 53 central and western Oklahoma counties to extend assistance to those impacted by the shutdown. To find a food pantry, visit rfbo.org/gethelp and enter a zip code.

“Helping me and people like me is like helping yourself because you just never know when it could be you,” said Sky, a furloughed Federal Aviation Administration employee and volunteer at the Regional Food Bank. “So please open up your heart and open up your wallet.”

To assist the Regional Food Bank with monetary donations, contact rfbo.org/shutdown or call 405-600-3136. To donate to the United Way of Central Oklahoma, visit unitedwayokc.org or call 405-236-8441.

Other Oklahoma City businesses offering services to federal employees during the shutdown include the Oklahoma City Museum of Art, which will offer free admission to Federal employees impacted by the partial government shutdown beginning Jan. 16. https://kfor.com/2019/01/16/oklahoma-city-museum-of-art-offering-free-admission-to-federal-employees-during-shutdown/

Legacy Bank is allowing customers who are furloughed government employees to overdraw their accounts up to the amount of their back pay without facing a fine.

“We value our customers and are thankful for their service as a government employee, and we hope this helps ease their minds during this shutdown,” says Legacy Bank Manager Kaci Barrett.

Isola Bella Apartments, the largest provider of FAA Student housing in Oklahoma City, is providing complimentary housing in January for students during the shutdown, which includes dining services.

The Oklahoma City National Memorial & Museum will offer free admission to all federal employees throughout the shutdown, regardless of whether they have been furloughed or are otherwise affected.

Restaurants, schools and other national businesses are also participating in programs which will aid federal employees.

According to Forbes, numerous national agencies are coming to the aid of federal employees including REI, committing $250,000 to national parks restoration efforts to the National Parks Foundation; Burt’s Bees and The North Face, via tweet, are committing to a $50,000 donation to the National Parks Foundation; The North Face; and Nestle Waters and Keep America Beautiful are both mobilizing volunteers and local affiliates to help with park clean up.

The partial government shutdown, the longest in history, began on Dec. 22, 2018. It has kept hundreds of thousands of workers from receiving paychecks.  The shutdown resulted from a disagreement between Congress and President Trump, who has demanded another $5.7 billion in federal funds for a US-Mexico border wall.

This has resulted in nine executive government departments shutting down, leaving around 800,000 employees without a source of income, according to the New York Times.